The past few months have been very busy for me, but I somehow managed to knock-out a Version 5 uBitx.  Pretty incredible little rig, congratulations, Farhan!

As it comes, the uBitx is set-up to use a condenser microphone, but it doesn't quite have enough gain to be used with my beloved Astatic 10D.  Not wanting to have yet another microphone on the desk, I adapted the mic amplifier circuit that I used in the SR-16 for the uBitx. 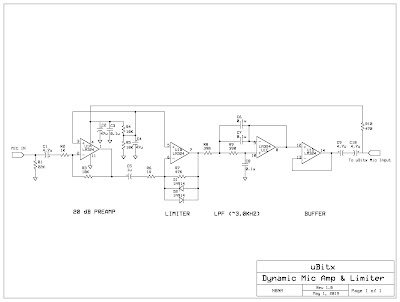 The circuit is based around the common LM-324 quad op-amp and will work equally well with pin-compatible chips like the TL-074 or TL-084.  The circuit is installed between the dynamic mic and the input to the uBitx, where the mic bias voltage provides the VCC for the op-amp.  I installed it in the rig, though it could just as well be installed in the base of the microphone, provided space exists.

The circuit itself is pretty straightforward: The first stage is a typical inverting amplifier with about 20 dB of gain.  This feeds the limiter stage, which clips any positive or negative signal peaks exceeding about .7V.  The limiter is also inverting, so the signal at its output is in-phase with the input signal from the microphone (not that this is important...)

The limiter is followed by a low-pass filter to remove any high-frequency artifacts created in the limiter.  The "knee" of the filter is around 3KHz. This is followed by a buffer stage to provide a low-impedance output to drive the rig. Resistors R4 and R5 form the voltage divider used to provide virtual ground (1/2 VCC) for the first two stages.

The output of the buffer probably looks odd, what with the two caps and all.  What I'm doing there is creating the equivalent of a 2.35uF non-polarized cap.  This is probably unnecessary; thinking about it,  C9 could be eliminated completely because the DC voltage at pin 14 will always be lower than the uBitx's mic bias voltage.  But, lets ignore that for now.  The DC bias voltage is routed, through R10 to capacitors C2 and C3, which remove any AC from the DC before applying it to the LM324.  Resistors R4 and R5 form the voltage divider used to provide virtual ground (1/2 VCC) for the amplifier/limiter stages, the filter and buffer are "self biased" to 1/2 VCC by the output of the limiter.

I optimized the gain to suit my 10D/D104 mics, and as such, really have to eat the microphone before it sounds nasty.  This is born out by the reports of "excellent audio" from the 40m SDR police, so I'm satisified with its performance.  If, however, it doesn't provide an appropriate amount of gain for a different mic, that can be adjusted by changing the value of R3 as the gain is determined by the formula AV = R3/R2.  The reason I say to adjust R3 instead of R2 is because R2 pretty much determines the input impedance of the circuit, so you want to keep it around 500-1K.
Posted by N8NM at 10:51 AM