A Homebrew Stereo for the Shack 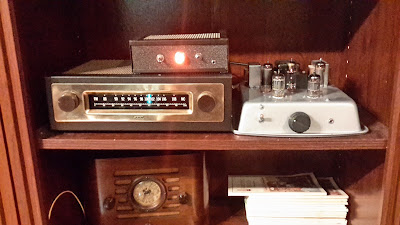 There are times when it's nice to listen to a little music while working at the bench.  For years, I've used a number of different vintage radios for this purpose, but few of them had the modern FM band and none were stereo.  So, I did what any other geek would do and built my own!

A battered old Eico HFT-90 that I had stashed in the attic over my garage provided the vortex that sucked me down this hole.  I don't remember how I came to own this thing, but I've been lugging it around for probably 30 years and it was finally time to do something with it.

It was in pretty rough shape, but it didn't offer up any real fight in my efforts to revive it; the only problem with the electronics were the filter caps were long shot and the controls were dirty.  Cosmetically, though, while the chassis was fine, the cabinet was rusty, so it was a total strip and respray.

But, you might wonder, isn't the HFT-90 monaural?  Yes, but that's easily rectified in any number of ways.  I would have liked to build a tube-based converter, but as a concession to practicality, went solid state using a discontinued device from 40 some years ago, the LM1310.  I was already familiar with that chip, my first job in electronics was working on consumer audio equipment and that chip was everywhere.

The MPX converter is the box above the tuner.  I built it from scrap sheet metal and sprayed it with left-over paint from the tuner.  The circuit is straight from the datasheet, works perfectly and only requires a handful of parts.  The large red lamp is the pilot detect light; the jeweled lens came from the junk pile and it's lit by a clear LED.

Again, the circuit is plucked straight from the datasheets.  It's the same one found in gazillions of TVs produced in the 50s into the 70s, and is perfectly adequate for this project.  No oxygen-free cables or gold plated binding posts here.  Actually, I did make one modification - I increased the cathode resistors to 1K because the power transformer from my junk-box is a little undersized.  Speaking of transformers, the outputs came from Antique Electronic Supply and I think they were made by Hammond.  They represent the only money spent for parts, about $35. 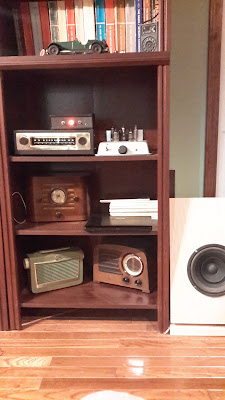 The speakers are also homebrew using 8" drivers from Parts Express.  The cabinets are built from 3/4" MDF and are sized based on the specs of the drivers at about .75 cubic feet.  I wrapped them in maple veneer because I've never seen maple speakers before.

So, how's it work?  For its intended purpose, filling a 12x14' room with sound, it works perfectly.  With maybe two watts per channel, it's not going to rattle the widows, but for kicking back sipping some Tullamore Dew while listening to Miles Davis, it's good enough.
Posted by N8NM at 10:53 PM