If you've read my earlier posts, you know that I'm a big advocate of the modular approach to design and construction, and that it all starts with "Noodling" - thinking about what I want the rig to do and laying-out how I want to accomplish it in a block diagram, which will serve as the project's "road map".

I used to scratch out these diagrams on paper until I discovered the Yed program, which is now my tool of choice.  It takes a little more time, mainly to get all the boxes uniform in size and all the lines straight, but I find that process also helps me think in a little more depth than I do when drawing on paper, and it's certainly easier on trees.

Anyway, above is the SDR-2017 diagram that I "finalized" back in August, and I've "X" marked the modules as I've completed them. Notice that I haven't deviated from the original design concept; the diagram keeps me on track and prevents succumbing to "feature creep"!

At this point, I've got a pretty respectable software defined receiver that covers from below the AM broadcast band up to the lower VHF spectrum, where it begins to run out of steam around 100 MHz.  Good bones for what'll ultimately become a 160 to six meter transceiver.

My primary use for this rig will be on the amateur bands, but I also want the ability to occasionally use it to receive shortwave broadcasts, which makes designing the bandpass filter networks a bit more complicated than it would be otherwise.  Being lazy, I borrowed much of the bandpass filter design from a commercial rig (IC-735), with some tweaks to optimize the circuit based on this application and what I have in my junkbox.

What I did first is create models of the Icom circuit in LT Spice, so that I could see what the Icom designers came up with.  Below is a model of the filter for the 160 Meter band: 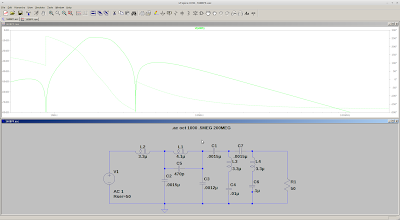 In this case, where I'm shamelessly stealing someone else's proven design, these models wont be used so much to tweak the design as they will to confirm that, once constructed, it's working as it should - more on this in a minute.

My next step was to build the inductors.  Sure, I could just order them from Mouser, but what's the fun in that?  So, I spent a few hours working with a spreadsheet that I put together years ago for this purpose, which spit out the number of turns and type of core for each filter element, then spent a few more hours winding the bloody things.  I don't know of anyone who enjoys that, but if you do, something's wrong with you...

With all that info, I drew the schematic shown below and began putting the filter board together. 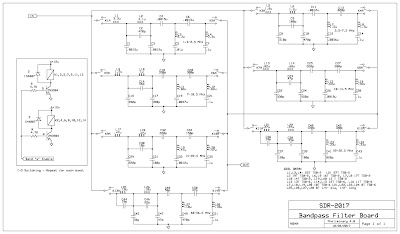 Rather than using diode switching as in the Icom, I'm using relays for a couple of reasons: First, I haven't had much luck homebrewing diode RF switches; I can get 'em to work, but the isolation is always poor.  Second: I got a good deal on the relays.  I started construction with the input switches, and will add the output switches as each band's filter is completed.  Doing it that way makes building the filters easier because I'm not reaching over the relays while working.

Speaking of that, there's been significant noodling involved in determining the physical layout of the filter board.  The board itself is 6" square, and I've divided it into seven "lanes" - one for each band - of about 0.75" each.  The input switches are at one side of the board and the outputs on the other.  Since the RF signals on this board are going to be low (<0dBm), I don't expect that there'll be any crosstalk between the filters, but if so, I'm leaving room to install shielding dividers between each lane.  I'll post pictures as I get further along in the construction.

As of last night, I've completed the 160m filter and "swept" it using my spectrum analyzer (Rohde & Schwarz FS-315.)  The response matches the LT Spice model so closely that it's almost spooky!  The curve is virtually identical, the only differences are in the loss (actual filter slightly better than model) and frequency of the peak (actual filter peaks slightly lower in frequency, but still FB in the amateur band.)  Excellent!

Once I have this board completed, I'll circle back and complete the T/R switching and mic audio circuits; much of this is incorporated into the Softrock hardware and Quisk software already, so that *should* be fairly simple... We shall see.

This is the point in any project where it becomes exciting and I have to fight the temptation to "pull an all-nighter" to get things done.  I'm getting close to retirement when that'll become practical, and man, am I ever looking forward to that!