It's been a while since my last entry because, well, I've been busy.  Betwixt all of the Holiday celebrations, I was hard at work turning a derelict CB VFO into a new rig for 30 Meters.

It started when, in early December, I attended a local hamfest with old friend Mark, N8IAJ.  As I usually do, I bypassed all of the stuff that typical hams gravitate toward in favor of the crusty junk that's often contained in well-worn cardboard boxes beneath the display tables.  In doing so, I came across a "Whatsit?": a sturdy, wrinkle black finised steel box with a nice National dial and a Heathkit knob on the side.  "How much?" I asked; "$5.00".  Cool! 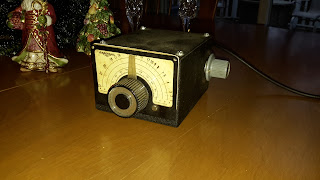 At the time, I really hadn't a clue as to what it was, only that I knew it'd be fodder for some future project.  For fun, I posted a "guess what it is" game to the Facebook Homebrew Radio group, and shot a similar message to some friends, including Bill, N2CQR and Pete, N6QW of Soldersmoke fame.  Pete and a couple of guys on Facebook studied the dial better than I did, noticing that it had markings for 1 - 23.  This was a dead giveaway that it was some kind of CB VFO.

Before any replies arrived, I dismantled it (had to know what it was so that I could tell someone they'd "won" the contest) and found that it was simply the L/C components for a VFO and a switch.  From what I can gather, it would have replaced the receive crystal in an ancient CB, allowing it to tune the band (and adjacent spectrum) continuously.  The components were all high-quality Millen, making it quite the score for $5.00!

My original thought was to quickly make it into a simple receiver for my grandsons to play with, but Bill encouraged me to turn it into the VFO for a Bitx, and, at the same time, I realized that the kids could weaponize the steel box (boys will be boys).

Farhan recently made the Bitx available as a preassembled module at a bargain price, and while I think it's a tremendous value, I really enjoy scratch-building.  I also thought that, being a CW guy, it'd been too long since I spent any time on 30 meters, so the plan started to come together.

My intention was for this to be a relatively quick build using junkbox parts, and to have it on the air in breadboard state by December 31.  So, I got busy:  First step was to assess whether I had any suitable crystals on-hand, and my junkbox yielded about a dozen rocks for 13.51 MHz.  Bingo!  I thought to myself "This'll work perfectly, rework the CB VFO to cover 50 KHz at about 3.4 MHz and we're in like Flynn!"  And off I went.

The first part of the project was converting the VFO,  and I knew just the circuit:  In Solid State Design for the Radio Amateur, there's a Doug DeMaw project for a 160m rig that, about 25 years ago, I used as the basis for a 20m receiver.  I knew that VFO design was solid, so scaled it to use the 150pF variable in the CB VFO and built it on a chunk of PCB that would be mounted inside of the steel box.  This went together in a couple of evenings, and, wow, I'm still astounded by it's stability.  Without any temperature compensation, it holds to within a few Hz/hour! Here's a look under the lid with the PCB in-place: 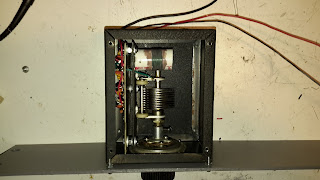 Once I had that out of the way, I started building the receiver from the "back-end" - The audio power amp (LM-380), preamp (LM-324), BFO (2N3904) and product detector went together easily.  The crystal filter took a little pruning: I evaluated all of the crystals on-hand and selected the four most closely matched for use in the filter.  Since I wanted to be able to use the rig on digital modes as well as CW, and don't have much trouble separating CW signals in my head, I decided on a rather wide bandwidth of 2.5 KHz.  Plugging the previously determined crystal parameters into the Dishal software (available as a download from QEX) provided the appropriate shunt capacitor values and I was off and running!

Succumbing to Bitx Mania, I stole the design of the IF amplifiers directly from Farhan; these are a proven design and work well, and they went together quickly.  Everything was looking good at that point, so I built the mixer, which revealed a near fatal flaw in my choice of IF frequency: The 3rd harmonic of the VFO falls right in the middle of the receiver passband!  D'oh!

I took a few days off from the project to ponder over my options.  I really didn't want to mess with the VFO - it was working so well, and I just knew that changing it dramatically would open up a whole can of worms, so I checked the Mouser catalog to see what kind of crystals they had available that would give me an IF that was within the adjustment range of the VFO while putting the harmonic far enough away from the passband that it could be filtered.  13.56 MHz rocks were available and, most importantly, cheap.  While that frequency would move the harmonic outside of the ham band, would it be far enough to be "filterable"?  I decided "What the hell?" and gave it a shot.

When the crystals arrived, I repeated the selection and calculation process and built a new crystal filter and changed the BFO and fired the rig up:  On transmit, the spur was down about 20 - 25 dB; I think I can work with this!

One cool thing about 30m is that it lends itself well to use of transistor radio IF transformers as bandpass filters.  It took five of 'em, but I was able to whip the spurs down enough to keep the FCC satisfied while not giving up anything as far as power output and receiver sensitivity.  Sweet!  Back to work!

For the RF power amplifier, I like Farhan's RF-386 circuit, but it packs a little too much gain for this application, so eliminated one gain stage and tweaked the feedback to work with the rig and selected output transistor, Mitsubishi's RD16HHF1.  At 13.8V, the circuit provides the perfect amount of gain to provide 5W output.

At that point, everything was haywired on a breadboard and working.  Since I already have one permanent breadboard rig (The Planker), this one needed to go into a box.  Rather than build the rather huge box that would be required to contain the VFO and transceiver circuitry, I chose to build a separate radio chassis and mount both boxes to a 19" rack panel that would also serve as the front panel of the rig. 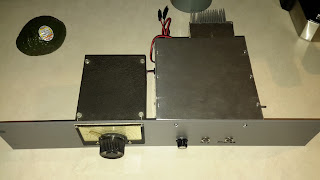 One of my favorite parts of a HB project is figuring out how to enclose the guts and building the chassis, and this project was no exception.  I settled on a design using three subchassis: The top and bottom are 6"x6"x1 1/2" chassis arranged back to back; the low level RF circuitry is on the bottom and the higher level stuff and switching are on the top.  The RF power amp is on a third subchassis (2"x2"x1 1/2") mounted to the back of the two "sandwiched" chassis.

Each is cut from 22 guage aluminum sheet and bent to shape on a small bending brake.  I've used a lot of different methods for creating a 3-D shape on the brake, and what seems to work best for chassis is to start by bending the main part of the chassis into a shape similar to a large segment of "C" channel, then bending up end caps, and securing everything together with either pop-rivets or #6-32screws, nuts and washers.  This produces a reasonably stiff structure using materials that can be purchased at the hardware store and easily worked by hand. 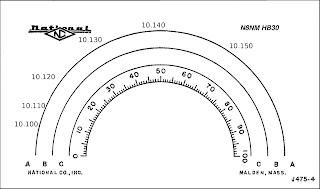 To create the dial, I made a clean copy of the original by scanning it and, using Gimp, removing the CB channel markings and any stains or other blemishes.  I printed a "working copy", slipped it into the dial and marked every 10 KHz point in the 30m band onto it.  Using this as a guide, I went back into the software and inserted the frequencies at the appropriate spots on the scale.

The picture below shows the rig as "installed" at N8NM. Since completing it yesterday, I've made several QSOs using CW and JT65, and it really is a fun little rig to operate.  I figure that, including the cost of the VFO, I'm probably into it for about $25 - not bad! 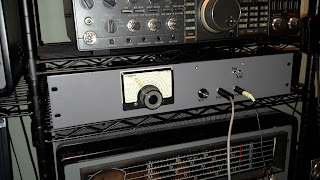