A NEW Audio Board for The Planker 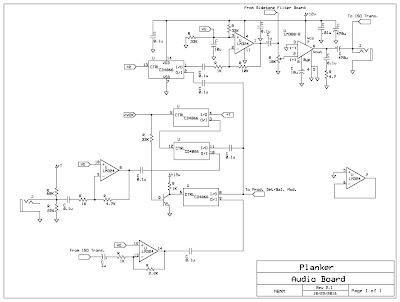 After some discussions with a fellow named Francis Flynn on Facebook about better ways to mute the RX audo during TX, and then subsequently looking at my original design and trying to come up with a better way to implement CW and Digital Modes (I'm diggin' JT65!), I decided to scrap the thing and start over.  It took a few days, but I installed the board diagrammed above in the rig today and it's working great!

As I mentioned in the post from earlier this week, my Linux PC does not have a serial port to support PTT, and I had no luck using a USB dongle, so I'd built a simple VOX circuit to provide T/R control when operating digital modes.  This worked well (I kept the VOX board), but, since the microphone and soundcard audio used the same amp, I had to remember to unplug the mic when operating digital, else my digital tones would be accompanied with my occasional bursts of unsavory language "What the F*&^ is this A$$ H01E doing!??"  Obviously the FCC frowns on that sort of thing, and lacking self control, I felt that addressing it through technology was the prudent course of action.

So - This board, well, to me, it's simpler:  The Audio PA uses the same LM380 as the original board, but the 2N3904 preamp has been replaced by one section of an TL082 Op-Amp (I know, the schematic says LM324 - it's pin compatible..)  This amp and the '380 are powered in both RX and TX modes, as they are necessary to provide an audible CW sidetone.  However, the 4066 CMOS gate at its input disconnects it from the product detector/balanced modulator while in transmit.

Not shown is the CW sidetone interface (forgot to document it...) - The local audio (speaker) is injected at the "hot" side of the volume control, while the audio to be transmitted is sent directly to the microphone amplifier.  In this case, one still must be congniscent of speaking while sending CW - the mic will be live - but I don't worry about that as I seldom say anything while talking with my hands.

I'm pretty happy with the performance of this board: Microphone and digital audio sound perfect, while CW still needs a bit of work as it is only driving the rig to 3-4 watts.  This should be an easy fix - The CW filter module terminates in an attenuator network, so I just need to pare back a few dB worth of attenuation.  Souldn't be a big deal.

Anyway, Thanks Francis Flynn!  Your comments got the grey matter stimulated, and this board is a definite improvement over the original.  Also, thanks for sending the link to the W7EL rig - That was a nice walk down memory lane, and seeing how Roy used the FET as a mute gate gave me the idea to use the 4066 CMOS chips for audio switching and routing.  FB OM!!